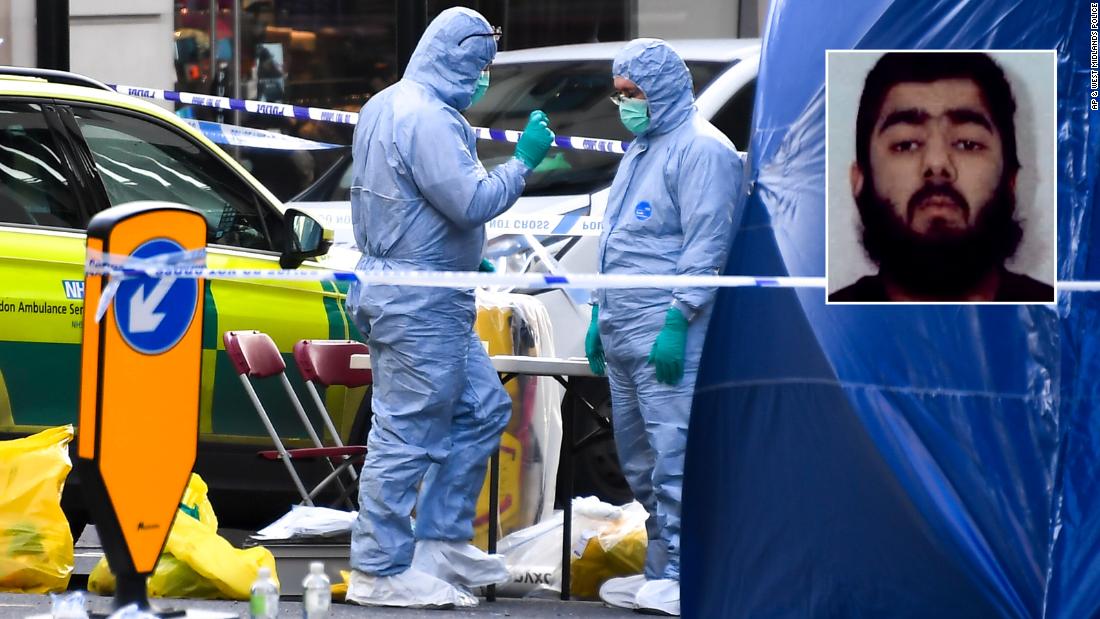 (CNN)The stabbing attack in London on Friday has thrust the issue of what to do with former terrorists back into the public spotlight, especially as hundreds more convicted offenders across Europe are due for release in the coming years.

Usman Khan had been out of jail for a year after serving part of a sentence for his involvement in a terrorism plot in 2010. On Friday, the 28-year old stabbed to death two people on London Bridge before being shot dead by police. Although he was wearing an ankle bracelet, he’d been able to travel to London from his home in the English Midlands.
Khan’s lawyer, Vajahat Sharif, said there were no signs that he would re-offend. He had been a teenager when charged in 2010. He told CNN he was “completely shocked” that his former client carried out Friday’s attack as he had seen signs over the years that he wanted to veer away from radicalism. 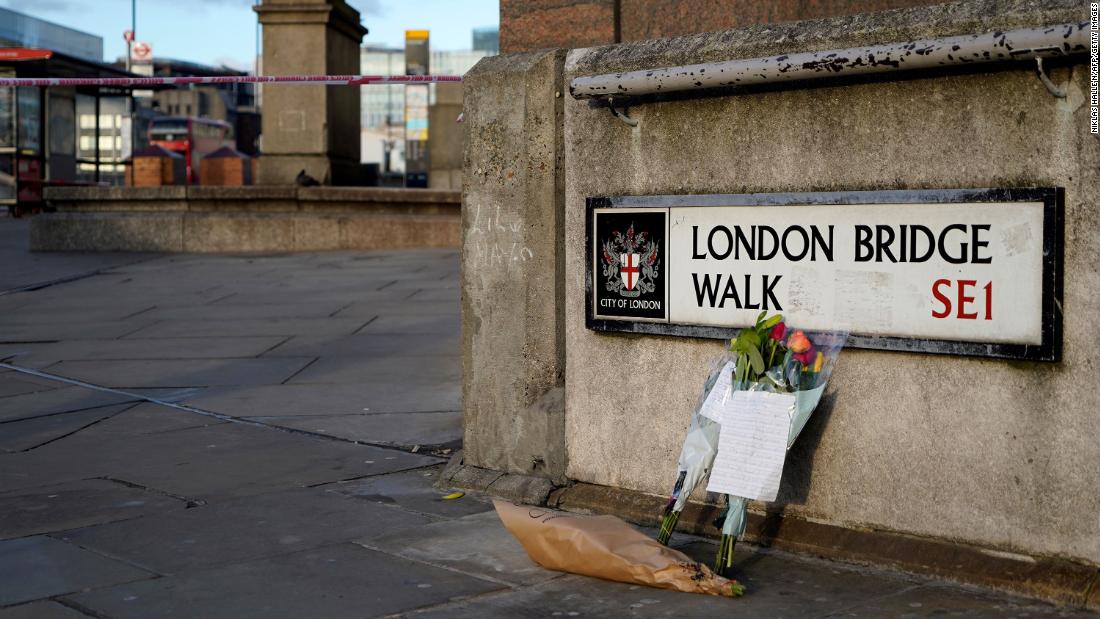 A letter obtained by CNN shows Khan writing from prison in 2012 asking to join a deradicalization course. Sharif confirms his team received the letter and had advised his client to write it in the hope of meeting with a specialist intervention consultancy that focuses on rehabilitating individuals convicted of terrorist offenses.
“I didn’t feel he understood with necessary depth the ideology he was following, and I didn’t want it to become his life,” Sharif said.
In the letter, Khan writes: “As you are fully aware of my offence, which is a terrorism offence. It relates more to what I intended and the mindset at that time, also the views I carried. Which I realize now after spending some time to think were not according to Islam and its teachings.” 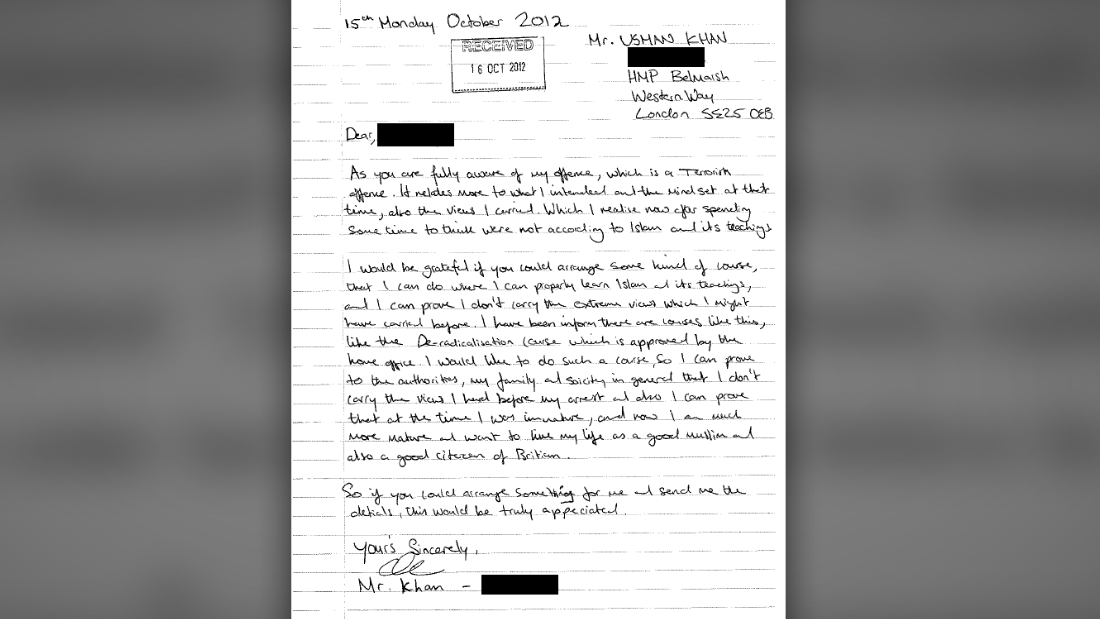 Sharif said limits on access to prisoners such as Khan prevented his client from being able to meet with a consultant from the rehab program.
Khan pled guilty at his trial and recanted his views — saying he realized his previous views “were not according to Islam and its teachings.”
Sharif said that soon before Khan’s release on license last year, “He wasn’t talking about politics. He wasn’t talking about jihad. He was talking in a positive way.”
It’s still unclear what changed, or whether Khan’s desire for rehabilitation was a ruse all along. 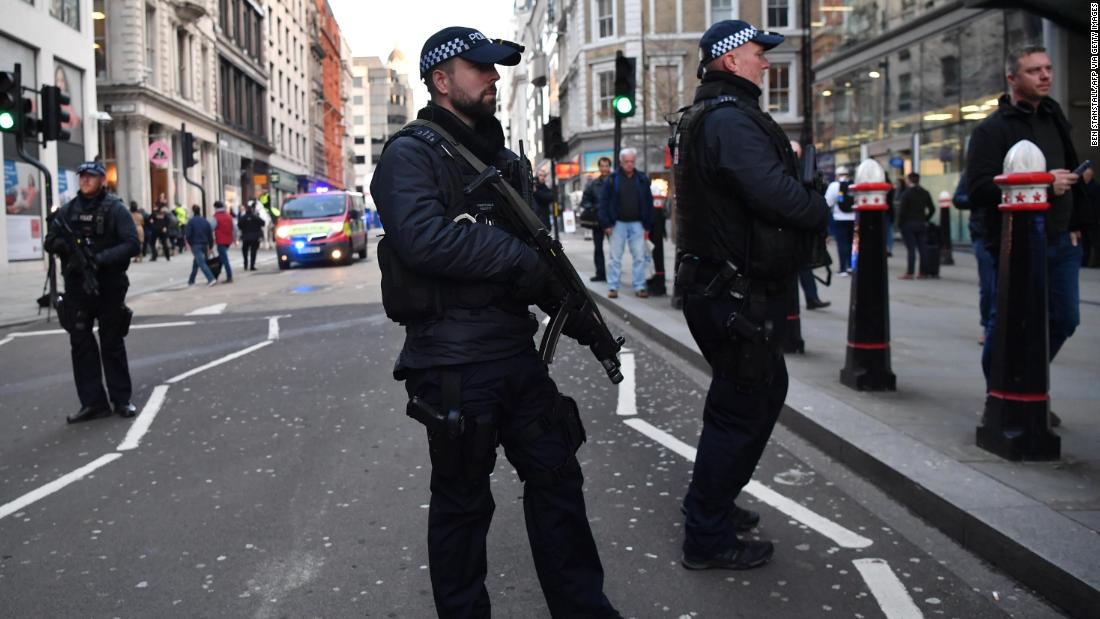 Khan and eight other defendants received long sentences early in 2012, after pleading guilty to preparing acts of terrorism and other terrorist-related offenses. Khan was part of an ambitious conspiracy that involved cells in Stoke-on-Trent, Cardiff and London who would meet in public parks in Wales. Khan talked about building pipe-bombs according to a formula in the online al Qaeda publication, Inspire.
Some of the men were planning to attack the London Stock Exchange. But Khan’s main preoccupation then was Kashmir, his ancestral homeland. He and the Stoke cell planned to train overseas for jihad at the beginning of 2011, and were focused on “fundraising for their plans to establish and recruit for a terrorist military training facility under the cover of a madrassa [religious school] on land owned by Usman Khan’s family.”
The judge in the case said Khan and one other man “were keen to perform acts of terrorism in Kashmir.”
What’s unclear at present is whether recent events in the Indian-controlled part of Kashmir may have radicalized Khan again. The central government in Delhi launched a security crackdown in the mainly Muslim region this year — largely cutting it off from the outside world — and later stripped much of it of its autonomous status. While there is no direct evidence that Khan was motivated by recent events in Kashmir, events there may have influenced his recent outlook.
That goes to the heart of the dilemma for authorities: what event or incident might radicalize a former prisoner? And whom do they monitor? Who should be eligible for early release? Full-time surveillance on an individual can occupy about 20 law enforcement agents. 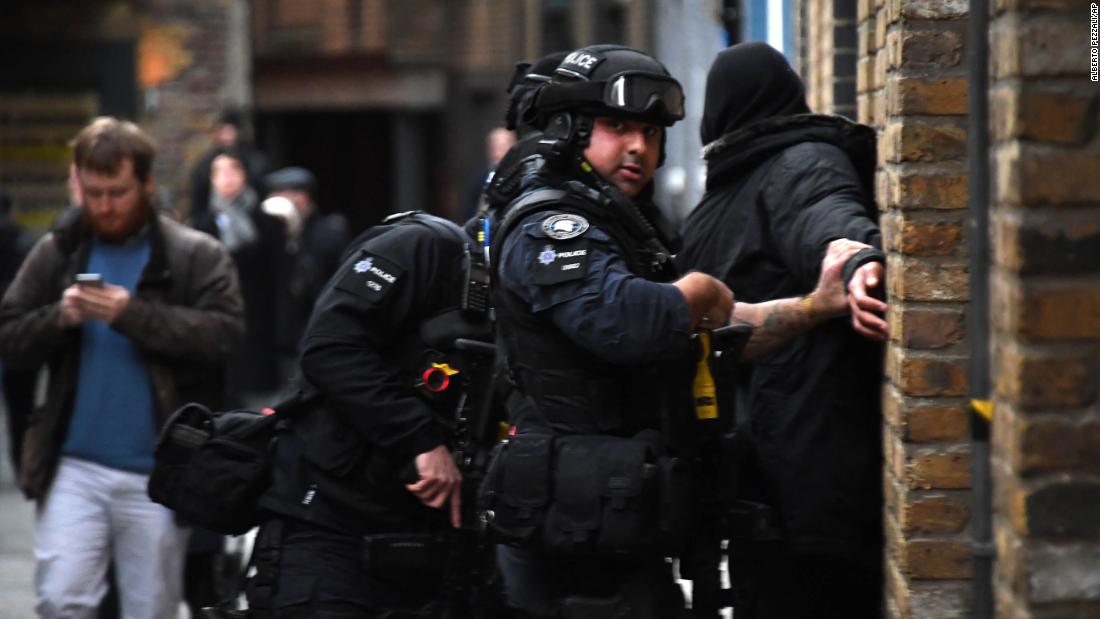 The attack by Usman Khan has become a major theme in the UK election campaign, with both main parties blaming the other for lax sentencing.
Khan had received a “custodial sentence” of 16 years, but that meant a minimum time in jail of just eight years. In sentencing the Stoke cell, the judge had warned that they “would remain, even after a lengthy term of imprisonment, of such a significant risk that the public could not be adequately protected by their being managed on license in the community.”
But Khan was out on license, without any Parole Board hearing. The UK Justice Ministry has now launched an “urgent review” of the parole conditions for every convicted terrorist released in the UK. The review will apply to about 70 individuals.
Five of Khan’s accomplices in the 2010 plot have been released. One of them, Mohibur Rahman, was released early after he applied to a deradicalization program — but was jailed again in August 2017 for plotting a “mass casualty attack” on a police or military target with two other men. Rahman received a minimum 20-year sentence.
In many cases across Europe, time in overcrowded and underfunded jails has also been a radicalizer. At least one of the Charlie Hebdo attackers in France was radicalized in prison. A UK government report in 2016 warned that Islamist extremism was “a growing problem within prisons, and a central, comprehensive and coordinated strategy is required to monitor and counter it.”
Among the most prominent of French jihadis who were released from prison was Fabien Clain. He subsequently went to Syria to join ISIS and read out the claim of responsibility for the 2015 Paris attacks that killed 130 people. 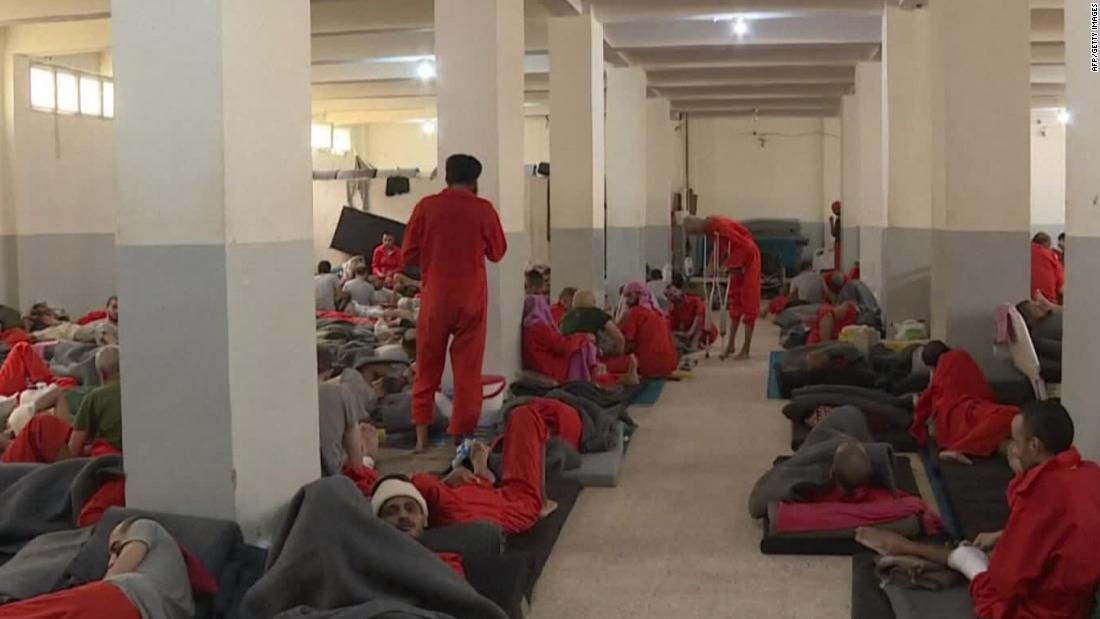 Now, efforts to repatriate foreign fighters and their families to Europe from detention camps in Syria are being revived, partly at the Trump administration’s instigation. Trump claimed in October: “I actually said to them [the Europeans], if you don’t take them, I’m going to drop them right on your border.
In recent years, the jail population across Europe has swollen to include dozens of foreign fighters who had gone to join ISIS in Iraq and Syria. While ISIS’ caliphate has been reduced to rubble and many of its fighters are dead or unaccounted for, some 1,600 have returned home to Europe according to the European Union — and many have received prison sentences.
In September, the think tank Globsec examined in detail the cases of more than 300 European jihadists implicated in terrorism in a single year, 2015. Some had been killed, but 199 had been convicted of various terror offenses. Kacper Rekawek, one of the report’s authors, told CNN that of that number, 45 were due for release by the end of 2019 and a total of 113 would be released from prison by the end of 2023.
Globsec says “jihadi ranks include hardened veterans who have already gone through more than one terrorism conviction and are intent on repeating their feats.” According to Rekawek, their analysis found that among European jihadists implicated in terrorism in 2015 who had previously committed a criminal offense, almost 20% were implicated in a terrorist offense both times.
Earlier this year a returning fighter in jail in France was one of three men charged with plotting to kill prison officials. A leading authority on jihadism in France, Marc Hecker of the French Institute for International Relations, says that between mid-2018 and the end of 2019, 50 individuals convicted of terrorism offenses plus an additional 450 deemed radical will have been released from French prisons.
Many of those allowed back into society will turn their back on terrorism, but others will have been hardened by their experiences, and become part of new networks. Globsec concludes that “such individuals are likely to return to their pre-arrest activities and once again attempt to engage in terrorism.”
Khan’s lawyer, Vajahat Sharif, is still trying to work out what went wrong with his client.
He told CNN: “What is so astonishing is that he recognized that the police were going to be in his life and he was fine about that. It was just them doing their job. He was very different from [what he was like as a] 19 year-old. He had matured a lot.”

Uber is being accused of underpaying drivers

What ancient Rome may teach on post-Brexit tourism

PM to pledge 5bn for bus and cycling services